The sea was calling out to me:
Pradip Patade, an avid marine lover

Pradip Patade, a native of Mumbai, takes a tremendous interest in the vast unexplored marine life in the city. Seen mostly chatting with fishers and trawlers on the shore of Mumbai, the 59-year-old made a career switch that would later change his life forever.

This life-altering decision made him quit his job of more than 20 years at a leading media house. He felt a growing need to give back to the city's sprawling yet polluted seashore – home to an exciting medley of marine life.

Why is he so attached to the sea? "My family is from the coastal belt of southern Maharashtra. I have been working for the last 30 years in Mumbai, again another city generously flanked by the Arabian Sea in the west. My previous office was also situated on the southern tip of the city. You see, I never really got detached from the sea," reasons Pradip.

An expert windsurfer and kayaking instructor, he spends his weekends on the shorelines of Mumbai. "…I have been into water sports for several years. However, my fascination has always been with animals that live below this magnificent city's rising and falling tides. While working as a full-timer in my previous job, I somehow managed to spend spending most of my time with fishers and lifeguards to know more about the plethora of life underwater." he explains. 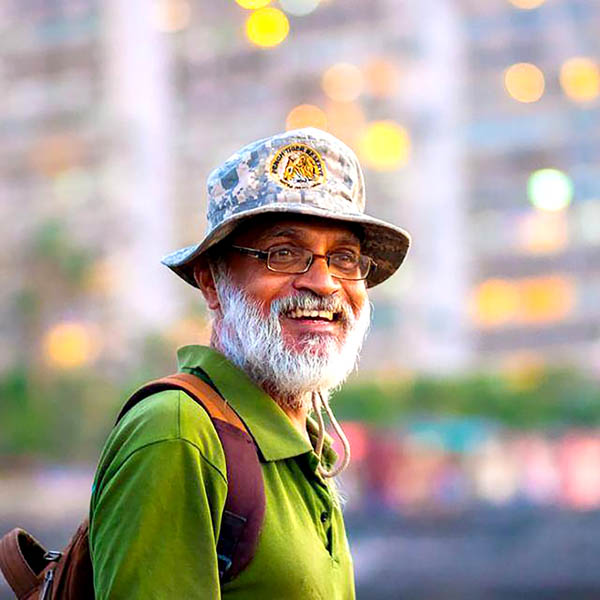 It was serendipity that Pradip's office was relocated to the city's suburbs – pushing him far away from the mighty Mumbai shoreline.

"When my office moved to a new location, I realised it is time to make the switch – the sea was calling out to me." Soon he left his cushy corporate job and started working with a water sports company in south Mumbai.

Every initiative needs a spark to get public attention

And that spark came into Pradip's life in 2016. Around 70 people were injured as they ventured into the sea during a Ganesh Visarjan procession at Girgaon Chowpatty in the city. "Nobody saw anything. Every injured individual had a semi-circular mark on their feet and legs. Even the authorities were clueless about this phenomenon. Ultimately they took these injured people to nearby hospitals. Doctors kept them under observation for the next 24 hours to see if they show any symptoms." 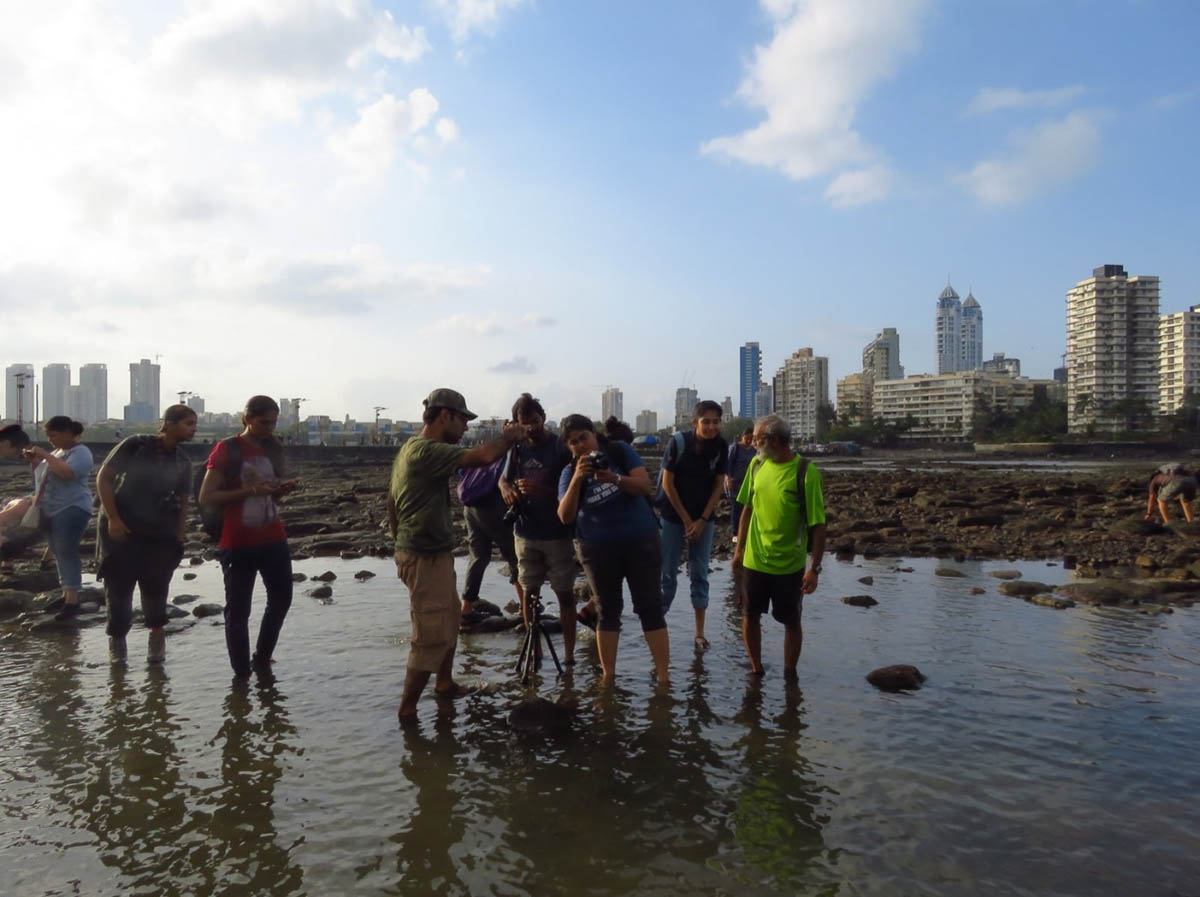 A team of marine enthusiasts and Pradip during a shore walk in Haji Ali, Mumbai.

While government bodies struggled to explain this phenomenon, Pradip came up with definitive proofs thanks to his stellar observation skills. "…Juvenile stingrays have been congregating at Girgaon for many years. The sandy shores of Chowpatty served as perfect feeding grounds for these animals. Unfortunately, that particular day, the sting rays' congregation coincided with a religious procession, resulting in a chaotic situation."

Later, he also confirmed the assembly of rays based on the catch of nearshore fishers. It made him get instant recognition which also grabbed the attention of several researchers.

Having constantly in touch with the ocean, Pradip realised the urgency to document Mumbai's thriving marine life reeling under constant pollution pressures. This triggered him to create a page on Facebook called 'Marine life of Mumbai.'

He used the platform by posting underwater photographs to spread awareness about Mumbai's neglected marine biodiversity. 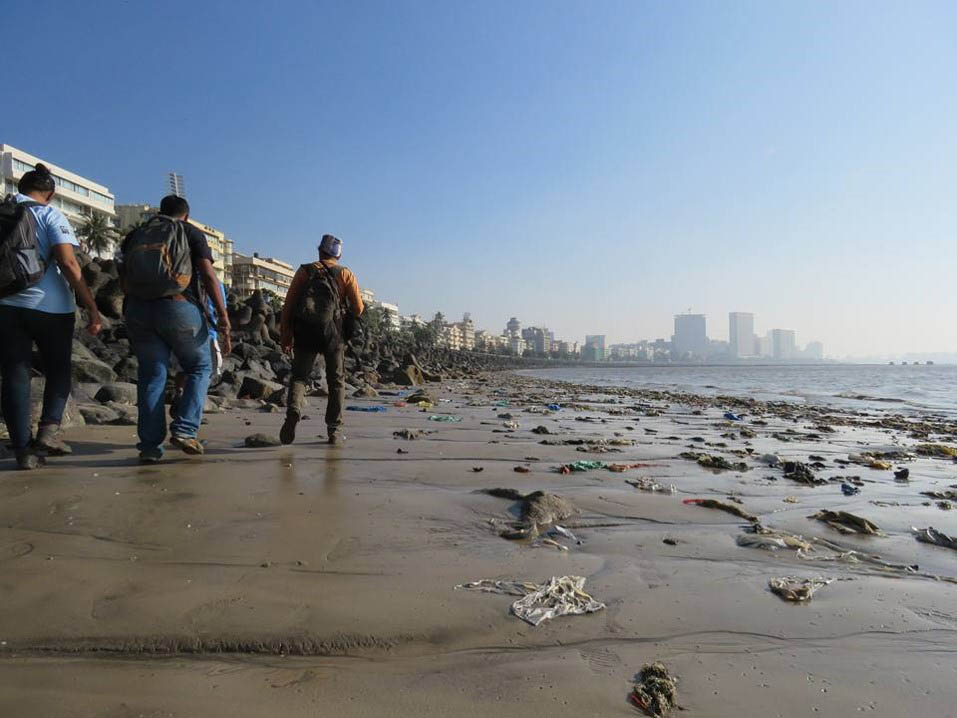 A sea of plastic found littered on the Marine Drive in Mumbai.

Marine Life of Mumbai evolved into a citizen-driven collective that brought much-needed public attention to coastal biodiversity and habitats in the urban environs of Mumbai.

At present, it continues as Coastal Conservation Foundation's flagship programme. "Along with my fellow partners and researchers, we have documented nearly 400 different marine species found in the choppy waters of the Mumbai coastline. These include endangered species like butterfly rays along with some protected species under the Wildlife Protection Act of India like corals, sea horses, pipefishes, sea cucumbers, sea snakes, etc."

Pradip is currently working as a director for the 'Coastal Conservation Foundation', a non-profit working towards creating awareness about marine wildlife, guiding students and scientists. Even today, one will find Pradip sitting with an angler on the coast of the tinsel town, inquiring about the day's catch and how the shore has changed and is constantly changing!