It takes a village to raise kids or save a stork ~
Story of Dr. Purnima Devi Barman

They say it takes a village to raise kids or save a stork! Such is the inspiring story of Dr. Purnima Devi Barman, who did both with much dedication and fondness. Ahead of International Women’s Day, Dr. Barman encourages all women to follow their passion. Give it all in, and the results will sparkle! Follow your unique trail and empower others as she says fondly.

When kids wish to go to school in the morning, young Purnima insisted on visiting the paddy fields. Raised by her grandmother, who had a tremendous influence on her, Purnima’s love for nature was firmly embedded in her from a young age. Her grandmother taught her to plant, and little did she know the seed she had sown then would bloom for a better tomorrow.

For a restless child, nature felt like home.
A dedicated conservationist, Dr. Purnima, is a doting mother to twin daughters and a supportive wife to her conservationist husband at home. 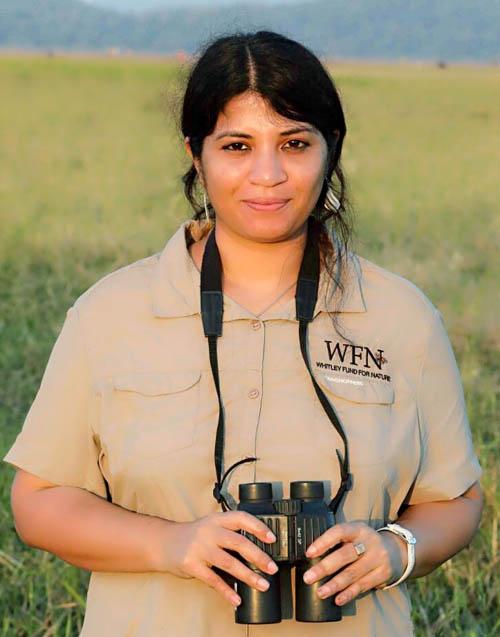 She is a wildlife biologist who has dedicated her life to protecting the greater adjutant, a member of the stork family. Locally known as Hargila, in 2014, the Zoological Society of London (ZSL) identified it as an unusual scavenging bird species close to extinction.

She is popularly known as the founder of the Hargila Army, a local all-female led grass-roots volunteer conservation effort. Dr. Barman single-handedly encouraged the local women entourage to protect nesting sites, save fallen Hargila birds, and educate the Assamese community on the importance of these rare and endangered scavengers. 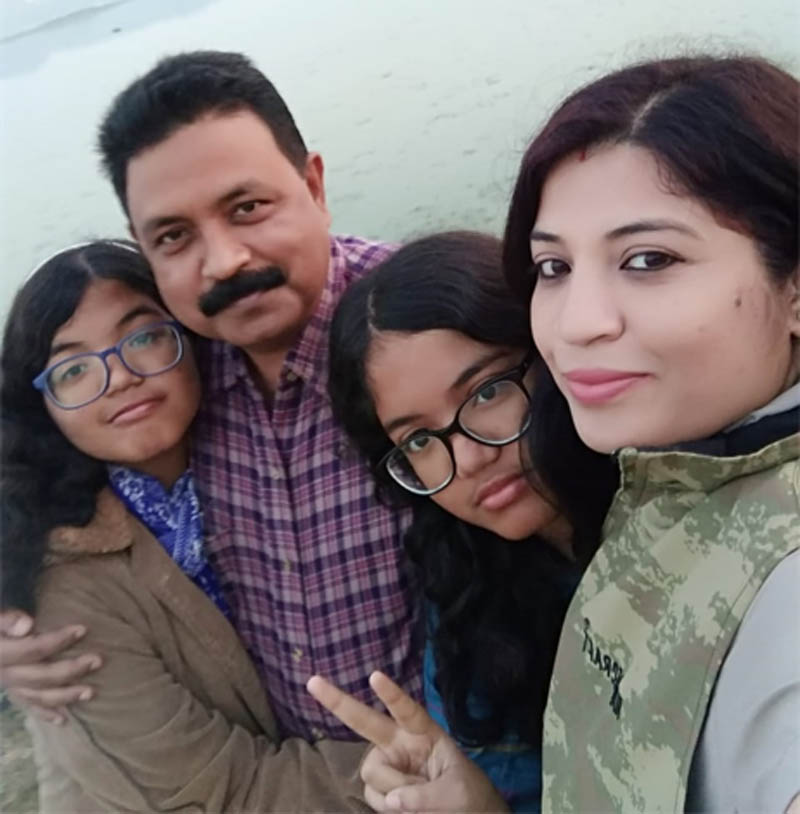 Purnima Devi Barman with her family.

This ungainly scavenger, considered a disease-carrying creature and a bad omen, was once commonly found across the wetlands in Southeast Asia. Today, less than 1,200 are left in the world, of which more than 75 per cent are residing in Assam itself. 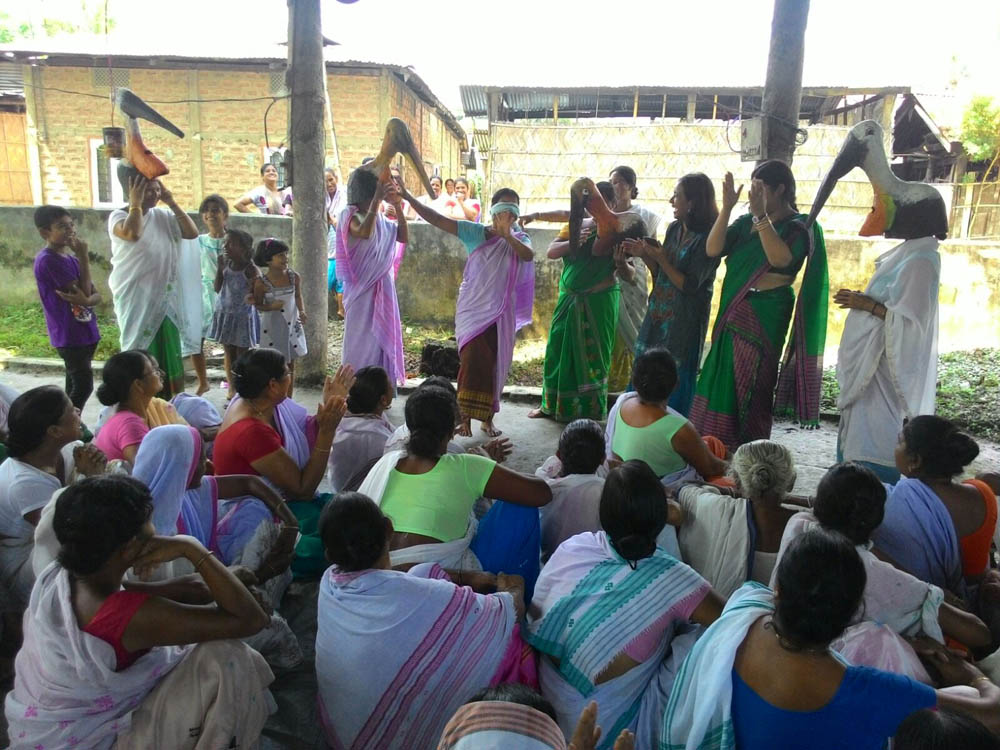 At play: Hargila awareness with communities.

This ungainly scavenger, considered a disease-carrying creature and a bad omen, was once commonly found across the wetlands in Southeast Asia. Today, less than 1,200 are left in the world, of which more than 75 per cent are residing in Assam itself. 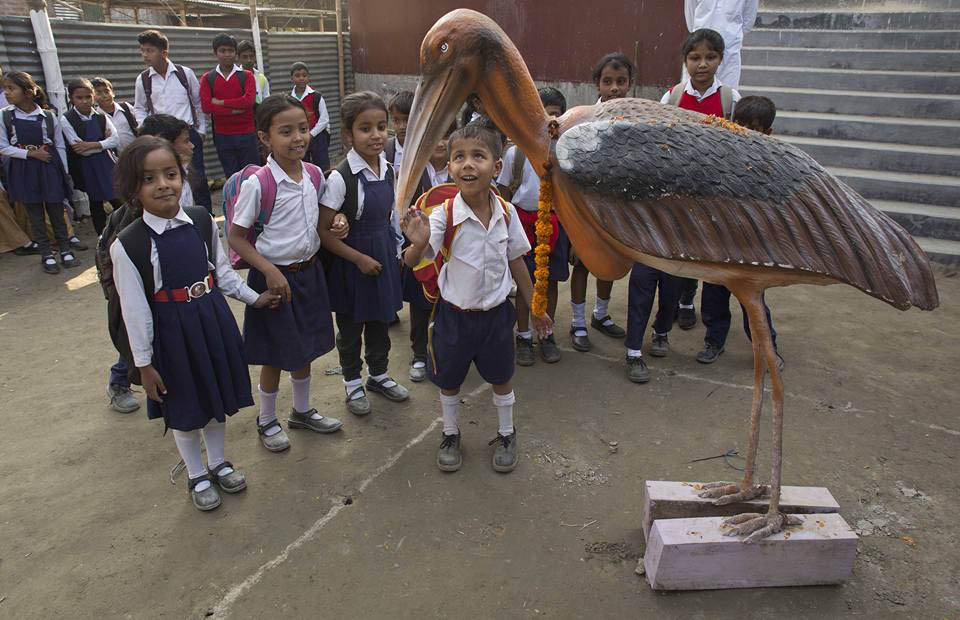 Seen here is a Hargila statue in a local school in Dadara.

By understanding the danger of extinction faced by the stork, she dedicated her life to protecting them. She has been tirelessly educating people walking from various spheres of life about the ecological significance of the bird. She believes that the avian species will survive when the villagers learn about the importance of their presence in the region and make it part of their cultural upbringing.

While she decided to lead a movement with courage, her path has never been easy. 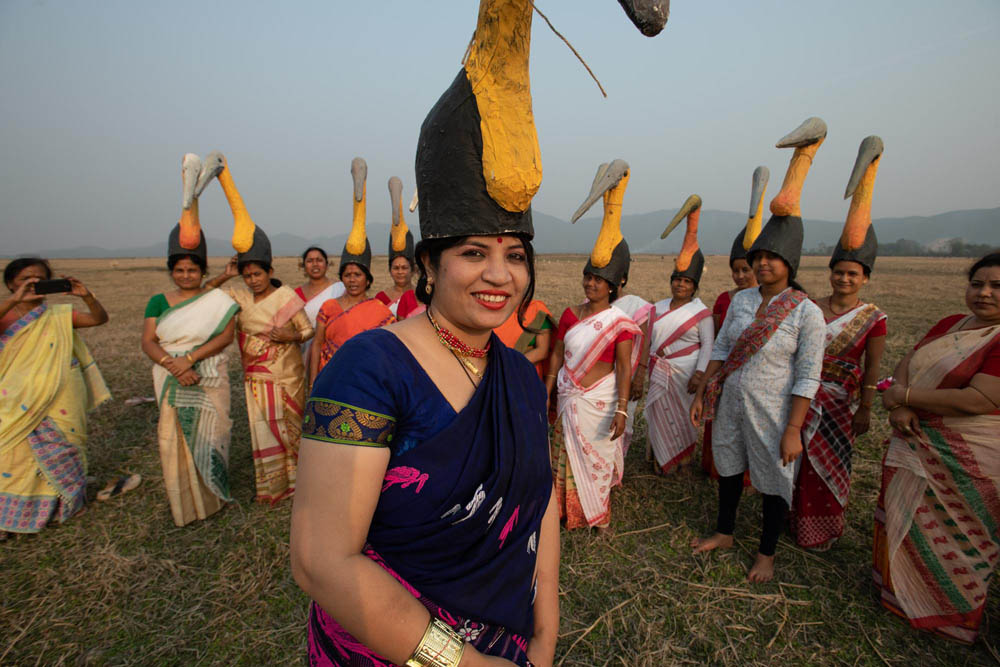 Dr. Purnima along with the Hargila army during a community dance programme.

“I delayed my PhD,” she says, and “focused more on keeping the bird alive in its habitat. Most people worked with charismatic species like the rhino or the elephant, but the Hargila needed to be conserved, too.”

“People, villagers and even my colleagues laughed at me for not choosing to be a scientist, but I sailed through it with the support of my family and the women around me who needed the motivation to be a part of the change in this world”, says Dr Barman.

One of the most significant movements of change, Dr. Barman, recollects the Lakshmi Puja festival of October 2009.

During Lakshmi Puja, a woman plays an imperative role during the religious ceremony.

“But, in our home, it was my husband who proudly stepped into my shoes and went ahead to conduct the ceremony himself. My husband came to my rescue and encouraged me to continue my fight for the survival of Hargilas.” she says, smiling widely.

Throughout the day, everyone blamed her for being in the village for a bird that is considered a bad omen instead of celebrating the festivities with her family. She was steadfast and made a choice. “I felt agitated, but at the end, it was all worth it”, she remembers. make it part of their cultural upbringing. 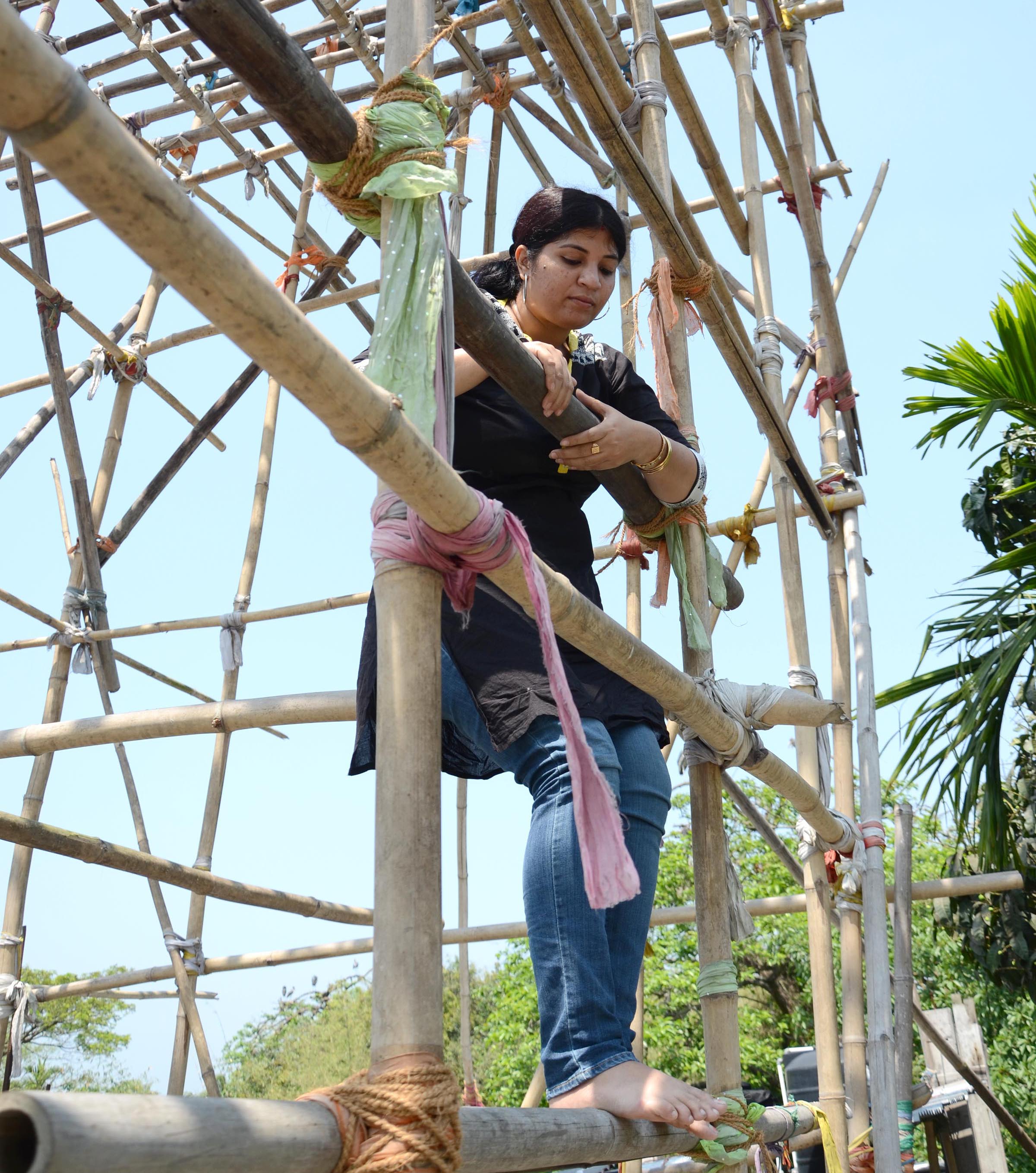 After this, she understood that cultural and behavioural changes, individual actions, and awareness must run in unison. “When you reach out to people in the way they resonate, you can impact multiple lives.” she feels. Her passion was to lead an army of women towards change. Through her experiences, she understood that women in the village disagreed with her conservation vision. She devised a unique idea to motivate women to participate by initiating a cooking contest. Through that, she persuaded them to join the Hargila army!

Dr. Barman discovered that one of the essential tools to change was shifting attitudes toward the storks – one stork baby shower, dress, or prayer at a time. So, constantly the Hargila army participates in cultural events to help people resonate with them.

With every step, she beams with pride that at present the importance of Hargilas is increasingly being acknowledged far and wide. 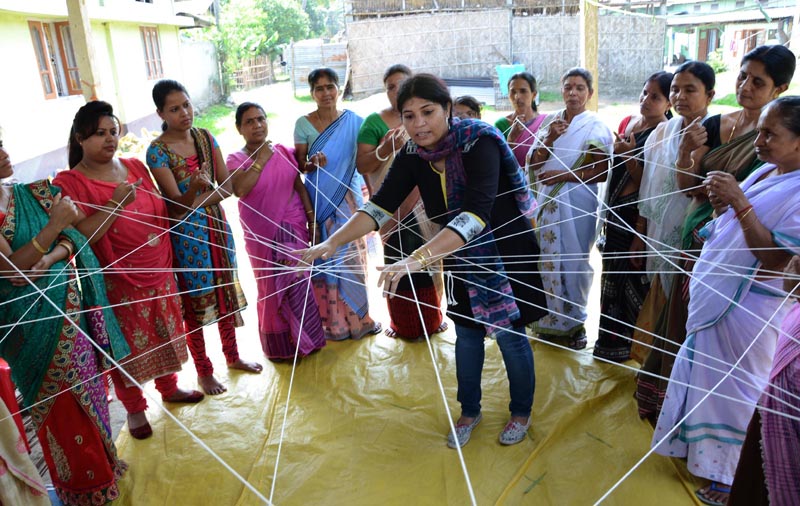 Playing the game- Web of life with rural women.

Together, the Hargila army of over 10,000 protects nesting trees, rescues fallen chicks, rehabilitates injured birds, and engages with communities to share knowledge about their avian neighbours.

From interacting with school children to establishing a centre for women to learn crafting traditional cloth with stork motifs, Dr Barman’s Hargila army is weaving the greater adjutant stork’s story into the local culture.

Along with her army, she strives to create a world where people and Hargilas co-exist together. Excitedly, she mentioned the Hargila army would be attending a wedding in the village next month. And, to their surprise, they were invited to the festivities themselves. “The communities have only now agreed and are delighted to have the bird as part of their wedding, but I have fought for years to recognise the Hargila as a sign of a good omen”, says Purnima.

She stressed women lead the Hargila army, and her dream has been to educate rural women to take constructive conservation actions and be at the forefront of change.

As she reminisces about her journey, she talks about her parents. She mentions how little they knew about wildlife. Initially, they never understood her course of work and always asked her to choose a different career. Later, they became very supportive and even joined her for multiple campaigns.

Her husband is a conservationist himself. “My husband is my biggest supporter; with his constant support, I have never lost motivation through my many years in the field of conservation”, proudly mentions Dr. Barman. 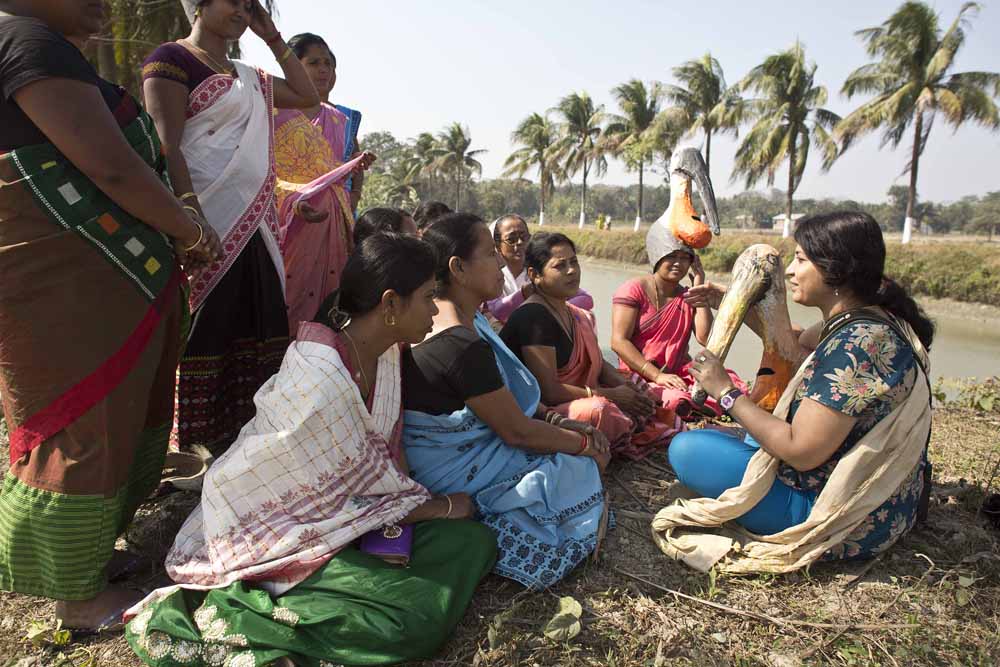 Meeting with the Hargila army.

Through the course of her career spanning several years, the female conservationist has received several awards. Among them is the coveted Nari Shakti Puraskar from the President of India, which is the highest civilian award for an Indian woman. She received the prestigious Whitley award in 2017, which H.R.H Princess Anne of UK conferred in London in the same year. She is also a recipient of the UNDP India biodiversity awards from United Nations. 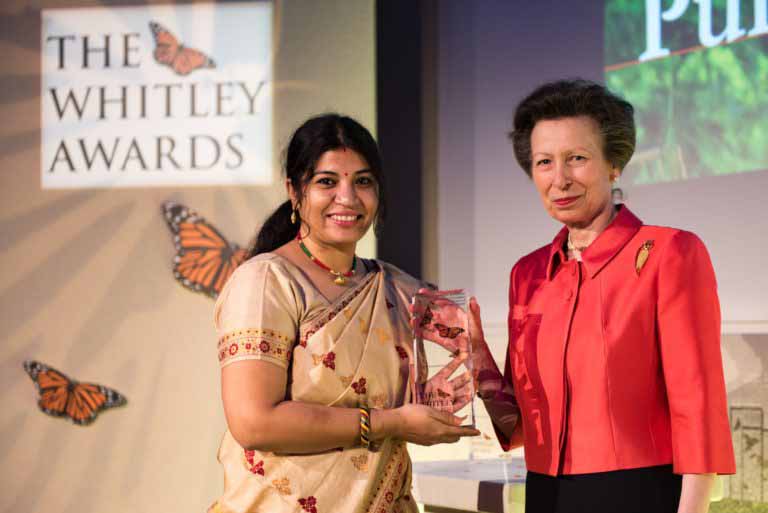 When women come together in solidarity, they set role models for future generations. to come. Raised by her grandmother, Purnima Devi Barman is an inspiration worldwide.

“My daughters are my biggest inspiration; they supported me through the many years and sacrificed much to make my journey possible”. She saw a twinkle in their eyes when they saw her working in the field, and that motivates her every single day!

We understand how vital childhood years to help shape our future. Her grandmother’s early influence on her - taught her to love nature. She is passing the same legacy to her daughters and the world who are learning to nurture nature – thanks to her unwavering passion for the environment.

Here’s to strong women in conservation. May we know them. May we be them. And, may we raise them! “Us women are unstoppable”, she concludes and we could not agree more.